2 in 1 Folding Treadmill With Bluetooth and LED Display

Ships From The United States

2 in 1 Folding Treadmill With Bluetooth and LED Display

The innovative 2-in-1 foldable treadmill is just the right thing you're looking for.

Featuring dual sports modes: running and walking, it can be used at any given time at your convenience. Its ultra-quiet motor and design structure allows it to be used at the home, office, and gym with no disturbances. Back, joints, knees, muscles, and ankles are provided a great cushioning with its 7-layered anti-skid and shock-absorbing running belt. Moreover, all your workout’s real-time details are displayed on the versatile LED display. If you want to connect your multi-media devices, the Bluetooth features come into action. Next, the phone holder only is there to ease the placement and usage of your phone while exercising. Thanks to the remote control and emergency stop button, the user is guaranteed safety in case of a mishap.

If you are looking for a product like this. Don't hesitate to buy it!

I have had this treadmill for 2 months now and have used is for 45 minutes almost every day. I am a 78 year old woman whose experience with a treadmill has been limited to using the commercial grade treadmill in our community clubhouse.
This treadmill, while not comparable to the $2K commercial grade treadmill, certainly does everything I need it to do.
It is very quiet and does not interfere with the TV if I'm watching it. It is sturdy and well constructed.
There is a ledge for an iPad or Kindle should I wish to read while walking.
And at the end of my walk, I know how long I've walked, how far I've walked and how many calories I've burned. I can also monitor my heart rate as I walk.
I was initially going to pay for someone to come out to assemble it, but after reading reviews, decided my husband and I could do it ourselves. Believe me, there is no need to pay to have it assembled. It was a breeze and took us less than an hour.
All in all, I would definitely recommend this treadmill to anyone looking for one that is no-frill & low price.

Let me start by saying I don't normally write reviews, but in this case I am making an exception for a couple reasons. First, I must say I was very nervous about buying a product like this online without seeing it in person. But no issue here. After I took it out of the box I was pleasantly surprised. I am not a "handy" person at all, but the assembly was a breeze.....and no swearing on my part. I was running on the treadmill in less than 30 minutes after receiving it. Both my wife and I use the treadmill daily and love it!! It is built solid, and the programs provide us with a different workout each time, helping to eliminate boredom. Perfect size because it is so compact.

The second reason for the review is to address comments from other buyers. Someone said it's heavy. Seriously??? It's a TREADMILL!! Would you prefer a model that is poorly built and not sturdy? Someone said it's loud....this is very subjective. But it has a MOTOR! And it's not a $1500 model!! I have been able to watch TV while running on the treadmill with no problem hearing the TV.

Bottom line......great product for the price!!!

WOW, GREAT DEAL -- Delighted we did not buy the $600 to $1,200 treadmills we were looking at. We are fast walkers and will do a light run every now and then. We did a lot of research and the TR 150 actually got 4 stars in the ratings so it beat two and tied one of the treadmills we were looking at. The low price made us a little unsure about what we would get. Thought at the low price compared to the others there must be something wrong. We we totally wrong and are delighted.
We thought it might not be solid but it really is and I weigh in at 225. They held the price down by putting the money into the basics and then limiting the electronic stuff to just 12 programs, pulse rate, time, & distance. Since we have a TV in the room and a tower fan we did not need the expensive displays as this was more than enough and less stuff to break in the future. We would buy it again in a minute. Could not be happier!!!

First off, I’m 6’2” 200 lbs and my wife is 5’5” 145 lbs and we both regularly use this treadmill for our cardio exercise without any issues. The machine itself is quiet, but of course when you are running on it, it’s going to be a bit louder, but I’m still able to watch the TV at normal volume even when I’m running at my top speed of 9mph (it goes to 10). I love the fact that it has an accessory holder rather than just an open space for you to put things because when I’m running fast, I don’t have to worry about my water bottle falling down or have fear that it’s going to tumble on to the deck and potentially have me stumble over it.

My wife really loves the large display as compared to others as well as the 3 incline settings (as compared to only 2 for others). She’s more of a walker/jogger, so she pays more attention to the display than I do since it has graphic that circles around and makes her aware of when she has finished a complete lap. One detail that I really like is that the heart rate monitor is part of the two handle bar on the side rather than a thumb. When I use to run on the others, it was a bit hard to run and know my heart rate as I would feel out of balance, but with Tumbling Dices' one, I can just grab the handle bar while maintaining my foot speed without any problems.

I’m pretty surprised that there are no reviews yet for this product, but given all the functions that it comes with, and how sturdy it is, I definitely feel Tumbling Dices' one will give you more bang for your buck for those looking to give it a try.

This treadmill has totally surprised me! Two years later and it still functions perfectly! The motor still sounds as new as the day I assembled it, the tread still moves smoothly, and all the buttons and programs still work flawlessly.

Definitely a fabulous bang for your buck!!

Treadmill arrived late last night ... late as in time of day, it actually arrived a day ahead of schedule...outer box was in mostly good condition with only one small rip —- pretty awesome for UPS!

Assembled it tonight ... assembly instructions were clear and concise, with both written and pictorial instructions ... assembly was EASY PEASY!! I did have someone to hold the console section while I connected the wires, that helped a lot.

I was worried because one of the electrical connections had broken in half, but all the wires were intact, still wrapped in their protective coating with no raw wires showing and I was still able to snap the connections together properly.

Plugged it in and got an error message .. turns out that in my eagerness I had forgotten to plug in the safety lanyard! 😝. I have my toddler and infant grandbabies here a lot so I actually LOVE that it won’t work without the safety lanyard attached!!

Once I connected the safety lanyard it started right up and I was a walking fool!!

I will use it for a couple weeks and update with a performance review!

For now, out of five possible stars: 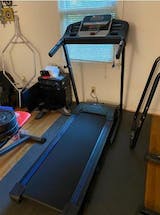