Ships From The United States Any compatible phone may receive quick charging from this power station, which has a USB-A charging connector with an 18W output. You can see the battery level, charge or discharge time, frequency, battery input, output power, etc. clearly thanks to the LCD display. The LED light is built with 3 settings, including 100% brightness, 50% brightness, and SOS mode to satisfy your various demands. It lights in the dark. Heat dissipation is accelerated by the built-in fan and heat dissipation holes on both sides, which also offer extraordinarily dependable and secure charging performance. The primary reason we bought this battery was for running my CPAP machine while camping. Although I could have easily run the machine for two nights (plus recharging phones) off of one charge, we topped it up each day with a solar panel. The first night, we even inflated four air mattresses using the AC and it still wasn't below the halfway point by the next morning. It did an amazing job of keeping everything charged and running for us. The variety of outputs was extremely helpful in enabling us to connect many different kinds of devices for power when needed. We even took it with us in the car one day and charged it off of the car adapter while powering tablets for the boys in the back seat. 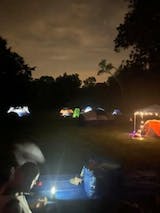 Only thing I would want people to know is that the default is DC and many American products require AC, so make sure you check that setting and change it before use appropriately.

It is a very nice small generator for camping to have lights and to power small electronics and nothing more. I purchased it for power outages for temporary power supply for home for a few hours of use. . A few months back I purchased the Westinghouse 12,000 potable generator for the whole house for longer time usage.

We've used the power station now on 3 different occasions. We used the 12v cigarette lighter outlet for a 12v car vacuum in the house, and it worked perfectly, the USB C outlet worked fine for our cell phone, and we used the two 110 volt plugs at the same time with two laptops at the same time at it worked like a charm. It is well built, and aesthetically pleasing, and very light weight. It was well worth the purchase.

I put it through its paces for 3 days. Powers up a windmachine fan, portable radio and 32 inch TV and charges my cell and IPAD ! I bought the 300s as I do not require much in an emergency ( 296 Wh, 300 Running Watts, and 600 Peak Watts ) but WOW ! It will power my radio or tv for days and keep my cell phone charged ! Very happy with this power station, it will be nice to have in the next power outage. After reading some of your reviews I did some research. If you see LOC (locked) press the AC & DC buttons at the same time for 5 seconds, that'll unlock the power station. if the units not charging via the wall outlet , plug into your car chargr for 30 or so minutes to "kick start" the battery ie power station. These are not generators they are power stations, best used to power electronics. Know your volts and watts (of what you want to power) and purchase the appropriate size. EO6 Means you've overloaded the power station